Watch out, Halloween is creeping to a door near you!

October 30 2015 Watch out, Halloween is creeping to a door near you!

It’s late October, and the leaves are changing colour and falling here in the UK. The colours of autumn are everywhere – pumpkins are at their seasonal prime and I have a variety of different ‘squash’ of different tones, shapes and speckles on our dining room table. It’s dark by 5pm, and I’m lighting candles to add warmth and atmosphere as cooler temperatures creep in.

This coming weekend brings the festival and celebrations of Halloween. It’s hard to miss, appearing loudly like a ‘hallmark card’ day with trademark black and orange hints to ‘stock up’ filling the shops from September.

I thought Halloween was primarily an American tradition that had snuck into the Australian psyche, and never bothered to understand it fully. When we came to the UK, however,  I quickly learned here that Halloween is actually part of ancient Pagan tradition (thousands of Irish years old!). Briefly, the name refers to ‘Old Hallow’s Eve’ – the night before the day of the dead, aligning with the Celtic festival of Samhain.

And so I walked straight into Halloween territory! But while the Irish and other UK migrants took the beliefs with them when they moved on to America, they didn’t take the tradition of sweets, lollies and candy. This came about when communities appropriated Halloween traditions to make them less frightening for children, and treats were given to discourage tricks and trouble caused by those who carried on the ‘chaos causing’ traditions of earlier ghosts. 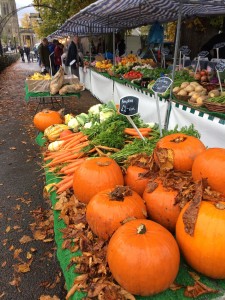 The sweetening of Halloween goes down in history as a boon for the junk food industry. And the rapid spread of popular commercial ideas means that the energy-dense version of Halloween made its way back to the UK, and has since spread further.

Our children did have great fun at Halloween themed parties back in Australia, but I don’t recall the ones we went to in Australia being quite so sugar-themed – it was more about the novelty and fun of dressing up and acting like frighteningly ghoulish creatures with their friends. Trick or treating hadn’t caught on too much, although it felt like it was doing so increasingly, especially judging by the dominance of halloween themed lollies and foods.

The kids want to go out to trick or treat this weekend, but I have my reservations. While they joined in last year when invited by new friends, and had lots of fun dressing up and knocking on strangers’ doors to be given lollies, I followed them half-heartedly. I’m sure I will be chided for saying that I don’t feel comfortable with my children knocking on the doors of strangers (because like many people these days, especially in big cities, we don’t know most of our local neighbours). I cringe at them asking said strangers for lollies which any other time we would tell them never to do. Then there’s the kilogram of sweets that come home; for weeks afterwards we had the same challenge that we face at Easter and after Birthday parties of unnecessary bags full of sugar to deal with.

How could I join in and do Halloween ‘healthier’? I could go out with them and set a limit on how many doors we knock on and ensure we only knock on the doors of people we know… and the thrill of the chase won’t be quite as exciting for the kids, but they’d at least get a little of the trick or treat novelty. Rationing them up-front would at least limit how much they ended up with, but they would still end up with more un-necessary sugary products than we need in our week. Like managing the onslaught of sugar from every other angle, I feel overwhelmed!

So this year we will watch and enjoy from the sidelines. We won’t be ensnared by confusing commercial paraphernalia, we won’t be buying packets of branded lollies to hoard at home or distribute, and we won’t be roaming the streets collecting them. We’ll spend a cozy evening learning the history of Halloween, tell spooky stories, play some fun scary games, dress up in crazy costumes, and we might have pumpkin soup and spiders’ legs for dinner.